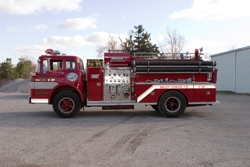 Benjamin Franklin established the first volunteer fire departments in Philadelphia in 1736. Before 1850 no city in the United States had fully paid firefighters. Volunteer firefighters played and continue to play an invaluable role in protecting lives and property.

From the earliest articles that could be found, it seems the City of Valley Center was thinking about fire protection as early as September 29, 1885. In October of the same year the city adopted fire codes, purchased buckets, and purchased ladders.

In 1915 the city council decided to purchase two chemical fire engines from the Obenchain-Boyer Fire Engine Company; both came with 45-gallon tanks.

In 1917 the city decided to pay the first and second firefighter who responded the first two engines to the fire.

In 1933 the State of Kansas sent a letter to the city to suggest they organize a Volunteer Fire Department; the city appointed J.E. Fitzgerald as Fire Chief.

In 1936 the city council entered into agreements with Park, Valley Center, Kechi, and Grant Townships for fire protection. In which the townships would pay twenty dollars for each call answered and a n additional ten dollars for each additional fire unit needed. Those agreements lasted eighteen years and then it was changed to one hundred dollars per year for township. Today we still respond to these townships with an exception of Kechi Township.

In 1953 the city purchased a Chevrolet Fire Engine (cab and chassis) from Don Hattan Cheverolet which was located on Main St. in Valley Center. Don Hattan sent the truck to Central Fire Truck Manufacturing Co. located in St. Louis MO. It had a fire pump and body installed and the total bill was around $7,500.

After receiving the new 1953 Chevrolet fire engine it was determined that the new truck would stay in the city limits and the old 1946 Ford would respond to calls in the townships.

After the 1953 Chevrolet fire engine was retired, we used it as a parade truck, and it carries all the equipment that was on it in 1953. It is currently housed and on loan at the Valley Center Historical Society (Engine 3).

In 1956 a new city hall, police station, and fire station was built at 117 N. Park St. It had two bays that exit out to N. Park St. and one out toward the alley. Today the building is occupied by the Valley Center Recreation Commission.

In 1958 Wayne Carnahan was appointed Asst. Fire Chief and the population was 2,162.

In 1963 Asst. Chief Carnahan retires with 29 years of service.

In 1969 Chief Raymond Botts retires with 39 years of service

In 1989 we moved into the new Public Safety Building which also houses the Police Department Dispatch and EMS quarters. The fire department has four bays and EMS has the fifth bay with doors both at the front and rear.

In 1995 the city purchased a Freightliner fire engine built by Ferrera Fire Equipment Company; this engine is our first out engine on all structure fires and second out on all medical calls (Engine 41 active).

In 2000 Asst. Chief Guy Sawhill retires with over 45 years of service and Larry Tormey was appointed Asst. Fire Chief.

In 2001 Fire Chief Bob Tormey retires with 45 years of service and Lonnie Tormey was appointed as interim Fire Chief.

In 2002 Lonnie Tormey was appointed to Fire Chief.

In 2002 the city council decided to hire a full time Safety Officer for the fire department to help with training, minor maintenance, assist with record keeping, and be on duty during the weekdays and Rob Tormey was appointed to that position.

Due to the 9/11 Terrorist Attacks on the Twin Towers in New York City, President Bush allocated money in the federal budget for Public Safety that created the Assistance to Firefighters Grant. Every year since 2002 Fire Departments, EMS organizations, and other emergency workers can apply for the grants. We applied in 2002 and 2003 but didn’t have any luck receiving a grant, but we kept applying.

In 2004 we applied and received a grant to purchase a new engine / tender. We were awarded the grant and received $225,000 from the Assistance to Firefighters Grant and the cities portion was $72,000 with a total cost of $296,000.  The new engine / tender carries all the equipment an engine would, carries 2,500 gallons of water, has a 1500 gallon per minute pump, and 1700 feet of hose. This is our "second out" engine on structure fires; it replaced Pumper 1 (Engine/Tender 411 active).

In 2005 we applied and received $109,000 dollars from the Assistance to Firefighters Grant and the cities portion was $9,500. This was used to purchase 17 new SCBA units and a spare air bottle for each unit which is enough for every firefighter riding on the truck. The new units are high pressure tanks at 4500 PSI compared to the old units that only held 2200 PSI. These SCBA are rated 45 minutes of use before having to be refilled. Along with this we received an air compressor and filling station for filling SCBA’s. All the equipment was NFPA and OHSHA compliant when purchased.

In 2005 the city purchased a new 2006 Ford 550 4x4 squad to replace older outdated 1972 Pumper 2; this apparatus is first out on grass fires and medical calls. The city secured a loan to pay for this truck from the local bank for $80,000. The department then had the body, pump, and tank installed locally and some of the members outfitted the truck in house with the emergency lights and equipment involved. (2006 Squad 41 retired).

In 2007 we applied and received $31,500 from the Assistance to Firefighters Grant for personal protective equipment and the cities portion was $1,700. The equipment consisted of firefighter coat, firefighter bunker pants, gloves, and nomex hood that are NFPA compliant. The cost was approximately $1,300 dollars per person.

In 2008 we applied for an Assistance to Firefighters Grant for mobile radios, portable radios, and mobile data terminals (apparatus computers) and received $106,000. All equipment is used to communicate en route and on scene during emergency operations.

In 2007 the city council gave approval to hire a second paid member of the fire department.

In 2008 Phil Tennissen was hired as a full-time firefighter/EMT (hired from within the department with a starting service date of 2004).

The department now had a Fire Capt. and a Firefighter on an 8:00 a.m. to 5:00 p.m. shift for a 2 man single unit response for calls during the shift and all other members were paid-on-call which responded in during shift hours to major calls or after hours to all calls they were available for.

In 2009 we applied for an Assistance to Firefighters Grant for pagers with a charging unit and received $12,992. The paging unit notifies fire personnel to be activated in an emergency so they can respond to the station.

In 2010 we applied for an Assistance to Firefighters Grant for a thermal imaging camera and two RIC bags and received $12,500. The thermal imaging camera illuminates heat signatures on structure fires and locates the area on fire or it can be used for searching for victims during thick smoke conditions. The RIC bag (rescue intervention bag) contains a cylinder of air with a universal connection to hook into a downed firefighter’s SCBA (self-contained breathing apparatus) during rescue procedures.

In 2017 Lake Tully and Ben English were hired as full-time firefighter/EMT’s.

The shifts were changed from 8:00 a.m. to 5:00 p.m. to an X and O style shift of 7:00 a.m. to 7:00 p.m. for coverage 7 days a week and the rule is still applied that the full time staff on shift responded to single unit responses during the day and paid-on-call firefighters responded during shifts to major calls or all after hour calls they are available for.

In 2018 Fire Chief Lonnie Tormey transitioned from paid-on-call to full-time Fire Chief and Phil Tennissen was prompted to Fire Captain to cover the X and O shift responsibilities.

In 2018 We applied for and received a grant from Firehouse Subs Public Safety Foundation in the amount of $24,343 to purchase vehicle extrication equipment. This purchase replaced the departments first set of extrication that was at least 25 years old.

In 2019 we applied for and received a grant from the Kansas Forest Service Volunteer Fire Assistance Program in the amount of $4,734.00 (department share $2,367.00) to purchase 9 sets of Wildland Firefighting personal protective equipment to include gloves, pants, coats and boots. This equipment will be utilized by personnel that deploy throughout the State of Kansas as part of the Sedgwick County Wildland Task Force (which we joined in the 1st quarter of 2019).

In 2020 we applied for and received funding from the Kansas Fire Marshal Firefighter Recruitment and Retention Grant program in the amount of $5,680.20 to purchase 10 sets of Wildland Firefighting personal protective equipment to include gloves, pants, coats and boots. This grant assists with outfitting the remainder of the department with Wildland PPE.

In 2020 we applied for and received funding from the Valley Center Menocause grant program in the amount of $1,400 to purchase a new 14" Husqavarna K970 Rescue Rotary Saw. This saw replaces an inoperable rotary saw and will also assist in different fireground operations.

(appointed by state of Kansas 1933 years of service unknown)

(appointed by city council 1940 retired with 39 years of service)

(appointed by city council 1953 retired with 29 years of service)

(appointed by city council 1969 retired with 45 years of service)

(appointed by city council 1969 retired with 45 years of service)

(appointed by city council 2000 retired with 40 years of service)